To the guy who decided it would be a good idea to loudly cough the word *boring* on his way out of the theatre in the middle of the Story of Marie and Julien Friday night: 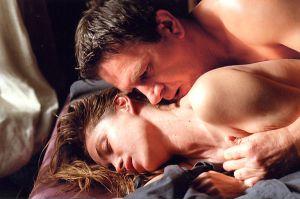 It might please you to learn that, within a few minutes of your departure, the clarity of your critique had sunk in to each and every one of us in the audience. That, though we'd been too blinded by our allegiance to the ideal of "art cinema" to recognize it on our own, your analysis spurred us to realize that "the Emperor Had No Clothes", and to walk, one by one and two by two, out into the lobby of the Pacific Film Archive, where Susan Oxtoby herself reassured us all that never again would the PFA make the mistake of programming a film like it.

Well, I'm afraid that none of that actually happened. There were a few chuckles after your departing remark, and then we all remained in our seats, enjoying, or perhaps (as I didn't have the wherewithal to conduct a survey) being bored by the rest of the film. This does not make us more virtuous than the people who, in case you thought you were being terribly original, walked out of the film before you did. But it certainly doesn't make you any better or smarter or more "with it" or honest than us either.

To be sure, this is a challenging film, and I'm not all that surprised no Frisco Bay film programmer had wanted to bring it to us before. To be truthful, I'm not certain what I'd have made of its first hour or so if I hadn't seen its elder cousin Celine and Julie Go Boating last month. Both films are mysteries where the mystery is little more than hinted at during the first half of the film, which, on a single viewing apiece for me so far, I take as instead the terrain for helping us get to know the characters and the nature of their relationship. In each case the first half is the foundation for the truly astonishing material that comes in the second half. In the case of Celine and Julie Go Boating the title characters are so naturally appealing that I didn't care at all that I wasn't getting a sense of narrative driving the film. In the case of the Story of Marie and Julien that's slightly less the case, but I was no longer a Rivette virgin and it was probably my trust that the director would at some point take me into some extraordinary realm like the one I'd so loved in Celine and Julie Go Boating that prevented the sense that I might have been "missing something" (or that the director, or the rest of the audience might have been) from taking hold. It didn't even occur to me to look at my watch (though Rivette had placed all those clocks on the screen) or be bored; I was, as one character put it, "waiting." Which paid off in a big way, delivering a third act as emotional and suspenseful as a great Val Lewton film, while following Rivette's tradition of guiding his audience a step closer to an intellectual understanding of the nature and "rules" of character, drama and cinema. I'd be sorry you had to miss it, if only you hadn't been such an ass about it.

But most of all I'm confused as to how you could possibly choose a sex scene with Emmanuelle Béart to be the moment to walk out on. What's wrong with you, man?

Comments:
This post could be a follow-up to my entry on audience response, part of Andy Horbal's Film Criticism Blog-A-Thon, or it could be a warm-up to Harry Tuttle's "Boring Art Film" Blog-A-Thon (well that's what he was calling it at first, anyway).

Oh good, I'm not the only one who has a rant in him. Which, we all know, is NEVER boring.

Kudos for speaking up!

Yeah, this film definitely packs a wallop at the end, and there's no overt indication in the story's lead up as to where it's heading. It's like Pygmalion crossed with Orpheus, and every bit as mythic in its execution. Damn, I love this film! :)

I have not seen "The Story of Marie and Julien" however, the idea of walking out of one of Ms. Beart's sex scenes seems unimaginable to me! And this coming from little ole homo-in-love-with-a-250#-bodybuilding-pornstar me...

I'm tired of rude audiences. As if the Daly City 20 or the Metreon weren't enough, they're actually invading the PFA too?!

Well, at least one did. I've been to the PFA this year more times than any other, and I have to say that usually the audiences seem conscious of being on thier best behavior. Even this form of rudeness is much different than the sort I tend to encounter at the multiplex: the PFA still doesn't seem to attract the sort of moviegoer so oblivous to his surroundings that he can't help but being a major disturbance (incessant talkers, cell-phone ringers, etc.) This guy was a different breed: the misguided joker.

Acquarello, I love your mythic descriptors for this film. Orpheus and Pygmalion seem very apt. And Pandora, Persephone, and many others too.

as you will know why, (but can't be divulged here), i've been thinking a lot about just such types of reactions to more difficult films and filmmakers. but as your anything-but-boring response to the ass-cougher here demonstrates, some people are beyond reaching because they don't want to be reached. some people revel so much in cynicsm, you just have to toss them aside like they toss aside these opportunities to be pushed into discomfort, into the unknowing, into patience, like it sounds this film does.

Brian, I saw this at TIFF three years ago; it was one of four films on my bill that day. It didn't blow me away right away (I liked it, but found it a bit uncanny and unsettling) but since then, it has steadily acquired a firm foothold in my mind. I love this film now. And I've only seen it that one time.

Just wanted to use it as an example of films being dynamic entities in our memory. What we carry with us are not films but memories of films, which are forever subject to change, like shifting sand.

Good Riddance to him. That'll keep one less ill-mannered, feebleminded, weak attention span afflicted dunderhead lacking the mental acuity to enjoy movies in any way more challenging than connecting the same tired ol' dots through one explosion to the next from wasting a perfectly good seat. Ahh. Now the rest of us can enjoy the experience.

Thanks for your perspectives, adam, girish, thom. I don't feel I can judge whether this guy was "unreachable" or not; perhaps he was just in a particular mood that day, or was trying to impress his date with his scoffing/coughing (if so, wonder if it worked?) but would normally be perfectly well-behaved.

I can't help but wonder if even the section of the film he did see might end up being, to use your phrase girish, "uncanny and unsettling" enough to linger in his mind, eventually forcing him to revisit the film on DVD perhaps. I really love your comment's last sentence, g. "What we carry with us are not films but memories of films, which are forever subject to change, like shifting sand." Can I quote that sometime?

And speaking of the DVD of this film, I'm finding myself a bit torn in preparing my top 10 list for Senses of Cinema. For the past three years I've used as an eligibility criterion for the year-end list I submit to them a debut Frisco Bay screening. Even though it was on the festival circuit years ago, the Story of Marie and Julien's screening at the PFA last week qualifies as its first local screening open to the public. BUT- it's been available on R1 DVD for over a year. Does that, plus its long-passed completion date, make it more apt as one of the year's best retrospectives than as one of the year's best new (to me and my neighbors) films?

I know, I should reserve my brainpower for more important questions, but I can't help it.

I think the two year rule still applies since the film never really did get a proper release, but it's only ten seconds if you dropped it on the floor. ;)

Besides, I still stick to the original intent of the Senses poll, which was "Favourite Film Things: A World Poll", which gave a lot of leeway to picking old and new films. I have a 2004 film on my list this year, Ruiz's Days in the Country which I don't think ever surfaced anywhere else in North America except for that one Film Comment Selects screening I attended with French subtitles.

Yeah, they seem to allow plenty of interpretation and leeway. I just want to be consistent with my other lists, I guess. I'm definitely leaning towards inclusion.

And I'm excited to see you own list when it's ready, acquarello!

Up/Down/Fragile also reminded me of Celine and Julie Go Boating. Thanks for standing up for Rivette and the PFA. His Joan the Maiden was also terrific.

Missed both of those, unfortunately. I could only attend three evenings to my sincere regret.

Nice blog, by the way!

I'd love to see either this or CELINE & JULIE. I'm back in The Bay -- I hope I can keep up and maybe we can even catch up? Anyways, great stuff, as usual.